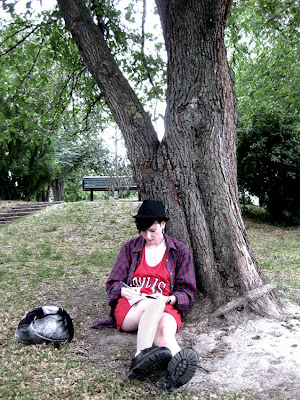 -Hey!
-Hey. He answers from the inner room.
-How are they sorted?
-Does one have to do that too? He says, followed by a sigh.
-No, I just wonder if they are somehow placed in sections...
-Aaaah, well it depends on what you're looking for.

He looks up from his computer and adds a hint of interest for a second. -Boy George, whatever happened to him?
-Dunno, I answer and carefully move closer into the next room passing the big "personnel only" sign that is blocking the entrance to the other half of the shop . (I feel stupid standing over by the entrance yelling.)
-Suddenly one day he just disappeared, he continues.


I reflect for a second over the fact that he instantly thought of Boy George of all people as soon as he spotted me.
-But he seemed so fragile...Maybe he broke to pieces, I say and fiddle on just any book without paying attention to the title.
-I think he has the time of his life, probably on a mansion in England drinking wine and eating good cheese.
-Simply reaps what he sowed.
-YES! I imagine it's fantastic, his life! He states, and is again absorbed by the computer in front of him.

-So, what you lookin for? He asks me and seems a bit annoyed that I'm still there.
-Well...not sure if I'm looking for anything in particular. I'm interested in many things...
-How tiresome for ya, huh!
-Well, military uniforms, anything on old clothes...beat literature...
He answers with more silence and peers into his old fat computer and mumbles some unrecognizable words followed by tirades of self hatred.
I feel a bit like leaving, but can't seem to force myself to the door. This conversation is going some place I wanna see and I think to myself I just can't leave at this point. So I continue staring at titles, moving around the room like a ghost until he forgets I'm there.
-Military uniforms you say? I def have nothing on that subject, you're at the wrong place! He now talks to me without looking up, and continues to ignore me for another while.
-PATTY SMITH! he then exclaims.
-Yes?
-Have you ever read her?
-No, actually.
-He replies with another sigh...-Wanna see it?
-Yes, I'd love to! I feel excited our conversation is moving forward again and move myself back towards his messy office space in the back.
-Arrrgh, what a pain you are!
-So you shouldn't have said anything.
-Eh?
-You shouldn't have mentioned her if you wanted me to leave... I bite my lip, wondering if I went too far.
-Zed, zero...zero...He repeats a bunch of numbers and letters to himself and then continues:
-Just let me finish this, ok!

He mumbles something that sounds like his life is fucking heavy and that he hates it all. He gets up and passes me and the loaded table in the narrow middle room and gets behind the counter by the window in the first room and sits down heavily. He pulls out a book of poems by Patty Smith and hands it to me. I open it and read a few lines before I know it will be mine shortly.
-How much?
-Probably 150, he replies. He thinks for another sec, and changes his mind.
-No, you'll get it for a hundred, and I'll get rid of you immediately! He looks at me rapidly with a grin on his face and continues: -If you'd said you were only into clothes, I'd have thrown you out instantly. That's why I have the sign over there. People think they can just barge straight into the second room, when they haven't even checked out the first room. (He points to the "personnel only" sign in the middle of the shop) What's wrong with the first room? I have loads of books here! He shakes his head disgruntedly and gets up from his chair.
-Military uniforms you say?
I realize he just invited me to join his club and follows him back behind the sign. He hands me a big book on Swedish 17th century military uniforms.
-Well, I have this one of course! He says (and seems pleased by my surprised face.)
-This is pretty sweet! I get excited and tell him about a little book I have, loaded with sketches of uniforms from all the big European wars.
-Yeah, must be Uniforms in Colour, I had that one years ago, beats me whatever happened to it! He stands still and thinks for a moment.
-I have it in German. (I try to brag) Oh yeah btw, did you know there were a couple of laws in the 17th and 18th centuries controlling that soldiers powdered their hair and wore black mustaches? Boys who didn't manage to grow their own mustache had to borrow a fake one to attach with a string around the ears. And if they ran out of hair-powder, it was statutoried that nearest farmer handed out wheat flour for free. As much as needed.
-No shit! He scratches his forehead and gets a distant look in his eyes.
-No shit at all! Sticky as hell when it rains, he, he.
I feel so pleased about the connection we have somehow established. And I start to think of myself as an antiquarian bookshop groupie. He gives me another tired smile and says that he never heard that story before.

He then asks me what I do for a living. I say that I work as a designer.
-DESIGNER?!!! What is it with all people nowadays all going around calling themselves designers? I am a designer too. I designed this store. He spreads his arms to their fullest extent and sweeps them around the room with a proud and imperial gesture.
–So what you designing?
-Clothes.
-What, you have your own brand or so?
-Yeah, with lots of denim.
-So what’s it called?
-Ravishing Mad.
He gets that distant look in his eyes again and softens. –Fuck I wish I could do that!

-Beat, you say. Well I have On The Road in Italian of course. It's nailed to the wall by the window over there.
I cross the room as I state that my Italian is a bit dodgy and then note that Kerouak actually is nailed to the wall. Straight through all the pages.
I turn to him and ask for the price on the military book and he says -A hundred for that one too. I tell him he'll get that immediately so he'll get rid of me once and for all. He looks me straight in the eyes for the first time and tells me that he's fuckin tired. -So many idiots come in here, he grins.
-You take care of yourself, I say meaningly and we tell each other goodbye.

I run off to the nearest stationery shop to buy a notebook and a pen. Really need to write this conversation down before I forget it.
Posted by ANNA ÖSTERLUND at 1:44 PM 3 comments: