High waist, drop crotch, hand painted, perfect ass, skinny fit, jodphur style, mens jeans, womens jeans, unisex, strong colours, DIY, signal red,  no muffintop, built in knees, carrot shape, wrinkel dye, concrete structure, these are the jeans that I have in stock, dying on demand so choices of colours are endless...Edition is limited and I only have a 1-4 pieces left in each size and waist sizes run from 25 to 31 for women and 29-33 for men. Send me an e-mail to ease your cravings - info (at) ravishingmad.se - The price is 1200 Swedish crowns for a pair (1 Euro is about 9 SEK), freight included.

Posted by ANNA ÖSTERLUND at 5:07 PM No comments:

”A creature in captivity is often driven to pointless, repetitive behaviour.”

On the first day of red Autumn, Truls and I went to the most Southern cape of Sweden and carried with us as many flint stones from the beach as we could manage in an hour. The sea was calm, grey and empty. Sky just the same. Little Ada helped us out and hauled excitedly the chalk covered weight up to the old VW bus. From a distance it seemed like we were piling up skulls that early, foggy morning.

Later. We knocked on our friend's door and little Olivia opend. Shy moment. We went into her room and drew green apples, delicious cupcakes, and witch castles with evil fences. We were all friends in a matter of minutes and dressed up in too warm clothes before heading for the pond in the nearby forest. A shooting tower served us a royal view over our new territory and on the way we found a poor old dove that had probably been killed for the price of its head. The girls were wearing red and white striped raincoats and we delivered hot coco and sandwiches from a lower position. 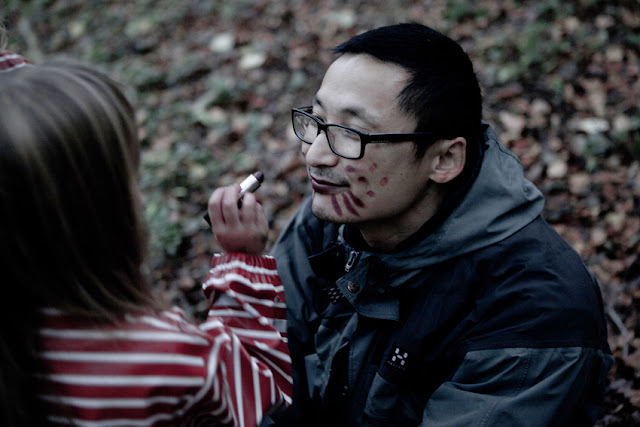 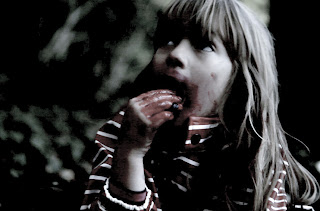 For the next four hours they were asked to run across the fields with a heavy bicycle, throw leaves in the air a million times, beating up a ticking clock, never, never, never look into the camera, stick their little hands in unbelievably sticky lingon berry jam, and shake girls shake...just shake your heads a little...a little more. "But Anna, are you aware we are no toys?" But girls, just shake a little more! "If we have to be sticky with jam and lipstick all over our faces, we want to paint your faces too" (I should of course have seen that one coming) Yes yes we all smiled in agreement, you paint us however you want, and they happily, giggly gave us wine red whiskers accompanied by little dots. So there we were, a family of four with seemingly blood stained faces, piling up skulls on a humid Saturday under the falling leaves. The girls manically licked their fingers trying to get clean, the stickiness of the sweetness was frustrating and no one would give them any soap.

As the darkness started to fall in the middle of the Afternoon, giggles were replaced by tired eyes and a longing for hide and seek. Every scene was nailed in first take and I remember Truls and I saying "this is the last one" probably 20 times. Our mind game was revealed with little effort and the girls started repeating whatever we said, with utterly sweet and polite voices. We couldn't stop laughing, yet the darkness wasn't waiting for us, wrapping us up until red was equal to green. I asked them over and over again: "try and look serious" the little sweet parrots gave me big smiles and responded politely with nonsence. Then suddenly, from out of nowhere, Ada dropped the clock to the ground while biting her lip and Olivia followed the movement with her eyes and the camera was on. It was a wrap!

Hide and seak continued in the darkness, dry branches in the hair added up to a lovely appearance. We filled our stomachs with the remainings of a bag of cinnamon buns and enjoyed the no longer endless view from the shooting tower. The girls had become best friends on their first playdate. 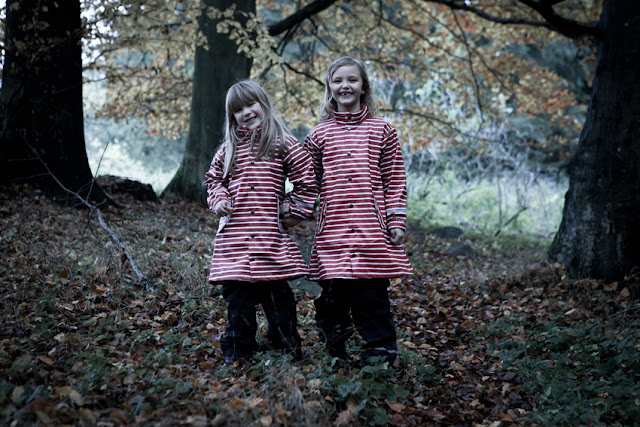 BREATHING is the first of composer Mikael Karlsson’s series of Talk Music pieces called "Traps” with strings performed by Sirius Quartet. I made this film together with my husband Truls and it shows two little girls seemingly at play in the forest, but as we linger with them we start noticing that they're measuring time and behaving in irrational, robotic or animal ways. They're on a very strict and hectic schedule somehow, and us watching them worries them.

Last year in August I came across Mikael Karlsson's music for the first time when it was played during a performance with Cedar Lake Contemporary Ballet in my all time favourite TV show So You Think You Can Dance. I fell head over heels for his music and immediately googled his name to send him an e-mail crossing my fingers for future fun together. He sent me the sweetest answer back in no time. We spent hours e-mailing back and forth over the following months and there were just so much to say, so much to want and to dream of. So we ended up making a short film together. Mikael had written a beautiful and poetic piece of music for a string quartet, and he layered it with his chilling yet comforting voice and sounds of wind and the time.
I tried to illustrate it visually by adding more information to the mystery of his words dealing with misconceptions, isolation and irrational behavior as comfort. After our long and rewarding talks about how an effective society sometimes forces people into apathetic behaviour in order to cope with everyday life, I realized that his words (to me) somehow was connected to a sense of being trapped in a treadmill. What do we do in situations when inexplicable routines traps us like animals, do we manically continue forward or do we protest? 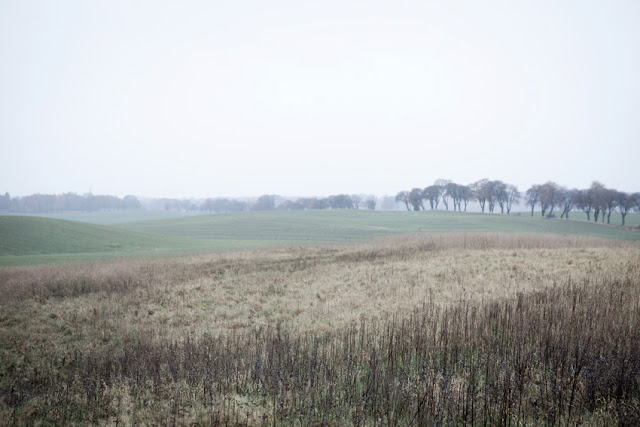 MIKAEL KARLSSON
Swedish composer Mikael Karlsson, based in New York, holds a masters degree in composition from the Aaron Copland School of Music and graduated Summa Cum Laude with departmental honors in June of 2005. He is deeply engaged in finding new ways to perform classical music and in 2003, he co-founded the film scoring collective Please MusicWorks LLC, which has grown to include more than 100 of New York’s best performers. Mikael composes both classical pieces and modern electronic music which has received numerous awards and his music has been performed in venues such as Carnegie Hall, Lincoln Center, The Swedish Royal Opera to mention a few, and his music has also moved on to the video game Battlefield - Bad Company. Among collaborations, his work can be found together with the work of Lydia Lunch, Mariam Wallentin, Kleerup, Lykke Li, Benoit-Swan Pouffe, Alexander Ekman, and many more. www.mikaelk.com

ANNA ÖSTERLUND
Fashion designer and photographer Anna Österlund holds a bachelors degree in Arts with a major in fashion design from the Swedish School of Textiles in Borås in June 2006. She runs the anti-fashion label Ravishing Mad from Malmö, Sweden, together with her husband Truls Bråhammar. Anna creates both ready to wear fashion and experimental collections, short films, music videos, art installations, photography and constant collaborations with dancers, musicians and artists in order to widen the definition of fashion, and to explore the sociological aspects of fashion that allows us to express our identity. Anna Österlund has been named “reinventor of denim” by the Italian fashion magazine Collezioni Sport and Street, for her draped silhouettes, hand painted denim structures and extremely high waists and her collections has been shown on the fashion weeks of New York, Paris, Berlin and more. www.ravishingmad.se

SIRIUS QUARTET
Born and bred in the downtown scene of New York City, Sirius Quartet has been blending the precision of classical music with the energy of a rock band for over a decade. The four conservatory-trained musicians are also highly skilled improvisers, whether playing acoustically or with electronic effects they push beyond the conventional sonic vocabulary associated with string instruments. From Lincoln Center and the Köln Triennale to the Knitting Factory and CBGB’s the Sirius makes itself at home in a wide range of venues and musical styles. For the last several years the Quartet has partnered with American Composers Orchestra and composer Randy Woolf to bring ACO’s Music Factory and Rhythm Factory education programs to the public schools of New York City. www.siriusstringquartet.com 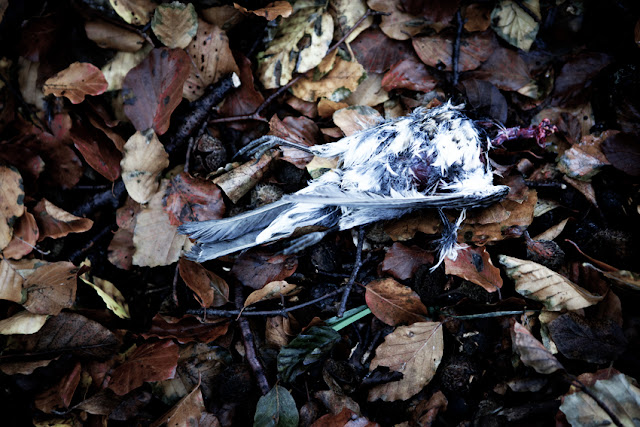 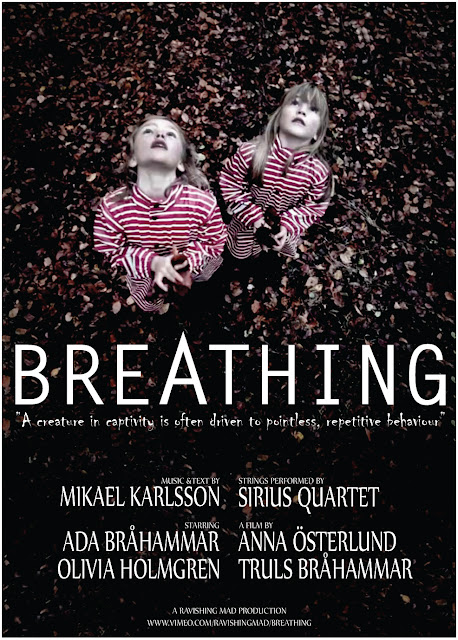 Posted by ANNA ÖSTERLUND at 3:23 AM No comments: