Here is a new film just made, an emotional, dark and honest three minute video illustrating the harrowing sorrow that follows when the ceremonies are long gone. It's an interpretation I made of  a string quartet processional called “Danach”, composed by the oh so brilliant Mikael Karlsson (same Mikael as in Breathing) who I just love to work with. It's the final track (performed by the talented musicians of Sirius Quartet) on the last-ever album called "Phantasmata Domestica" from the avant-punk electronica duo Black Sun Productions and this album is the outcome of their three year long collaboration with Mikael Karlsson. The punk legend Lydia Lunch is actually a collaborator on this album too. She's one of those people that I really look up to. I discovered her work from the 90'ies some years ago and was soooo inspired, she's the mother of  DIY and the queen of underground, she gave me the courage to start making my own videos.

The album is about loss, mourning and the grimness in having to move on. Sadly, it's the last ever album from Black Sun Productions, since Massimo Villani and Pierce Wyss after a decade of fantastic, uncompromising art-making have decided to go separate ways. You might have heard of them before, they also go under the name Anarcocks, and call themselves "artivists" they're really crazy and cool I think, far away from the mainstream tracks and seemingly completely fearless.

Black Sun Productions have performed together internationally for a decade, often in collaboration with other artists such as Lydia Lunch and Coil, and have made controversial art installation tours, experimental film and music, and have in their work explored everything from political anti-racist movements to ritualized sex and fetisch.The album name is Phantasmata Domestica which means something like house ghost and is an epic and emotional tale about sorrow and loss. It's dedicated to a long-time collaborator of  theirs, Peter "Sleazy" Christopherson of the band Coil. who they used to perform with. It is now two years since Sleazy's death.

The last track "Danach" is about the next day, a person waking up in a cold dreamlike world, being forced to move on with her life yet overwhelmed by sorrow and reality. Mikael called it "when a horrible light demands a new day and when the ceremonies are all gone. We're never more naked than then, never more honestly fragile. It is at this moment we either grow or crumble as persons." 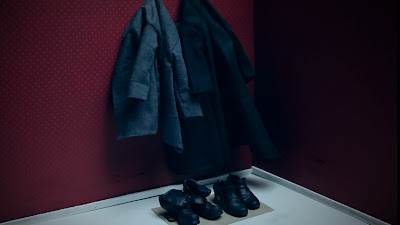 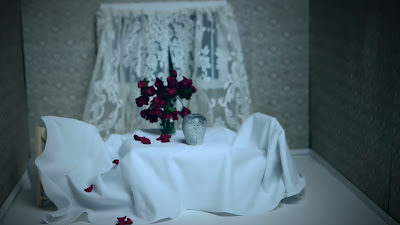 I got to interpret the music freely and came up with this video in just a weeks time. I made the heavy wool coat that she's wearing and added my grandmother's old mourning veil to the costume. The house I built on top of an old record player, so I could rotate it and the wind comes from Truls who's standing behind the window with my blow-drier. I had a lot of fun making the film, it's quite tricky to go through with ideas when you don't have a budget or a crew to help out, but sometimes that gives birth to new ideas. You should have seen me running back and forth in the forest between the camera and the smoke patrons. 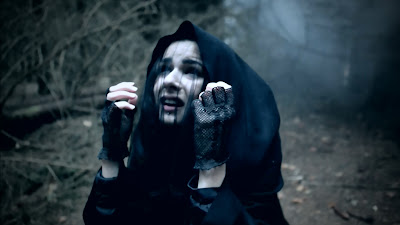 Read more in Paul Gallagher's interview with me in the Dangerous Minds blog.

The album Phantasmata Domestica is available on iTunes and Spotify and if you're interested in knowing more about Mikaels incredible music projects, you should definitely sign up for his once a month newsletter. It includes treats like free downloads  and the joy of reading his beautifully written texts about his work and collaborations with other contemporary artists as Lykke-Li, Kleerup, Amadeus Leopold, Cedar Lake Contemporary Ballet, Tobias Picker, Bruce LaBruce, Lydia Lunch, Alvin Ailey American Dance Theatre, Benoit-Swan Pouffer, Alexander Ekman, The Swedish Royal Ballet, Mariam Wallentin and a looooong list of many more extraordinary talents.
Posted by ANNA ÖSTERLUND at 12:51 AM